Dangers of Splenda & Other Artificial Sugars 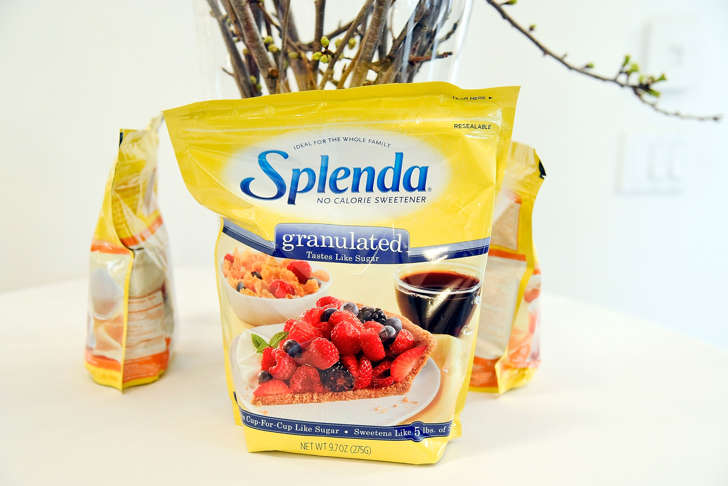 Before I get into the whole explaination of the Dangers of Splenda let me just rant a little....ok, No matter what name they give it, if God didn't make it naturally then it isn't as safe as they say.....just saying..... now, on with the science....

Sure, the idea of getting your sugar fix without the calories always seems enticing, but new research suggests that Splenda—an artificial sweetener recently considered safe—may contribute to serious health problems like cancer.

The study, published in the International Journal of Occupational and Environmental Health, found that mice fed sucralose daily throughout their lives developed leukemia and other blood cancers. In response to the findings, the Center for Science in the Public Interest—a nutrition watchdog group that assesses the safety of food additives—has now formally recommended that consumers avoid the sweetener. That's a big deal, considering that until 2013, they'd rated the additive as "safe."

Though the lab behind the study has been criticized in the past, the CSPI says this new evidence is especially powerful because it was funded without special interests in mind. "For most food additives, the safety studies are conducted by the manufacturers who have financial incentives," says Lisa Lefferts, MSPH, senior scientist at the CSPI. (Here's why industry funding in nutrition studies is such a huge problem.)

This new evidence was especially powerful because it was funded without special interests in mind, explains Lisa Lefferts, MSPH, senior scientist at the CSPI. "For most food additives, the safety studies are conducted by the manufacturers who have financial incentives," Lefferts says. (Here's why industry funding in nutrition studies is such a huge problem.) Granted, the doses of sucralose used in the study were equivalent to someone drinking at least 10 cans of diet soda per day—tough for anyone to do, but not totally out of the realm of possibility if you're consuming artificial sweeteners from multiple food and drink sources. "And even if you consume less, that doesn't mean there's no problem," Lefferts says. "When something causes cancer at high doses, it generally causes cancer at lower doses, the risk is just smaller."

PLENTY OF REASONS TO SKIP OUT...

But even if you discount this new mouse study, you'll still find plenty of reasons to skip out on sucralose. A growing body of research shows that artificial sweeteners may actually cause weight gain, not weight loss. One study found drinking diet soda was linked toi ncreased belly fat; in another, each daily can was associated with a 41% jump in obesity risk. Sucralose has even been shown to mess with your blood sugar and insulin levels, causing spikes and dips that could lead to cravings later on.

The bottom line: the scientists at the CSPI firmly believe you should steer clear of sucralose. But that doesn't mean you should start shoveling spoonfuls of regular table sugar, either. Instead, try safer stevia extract or any of these 10 genius ways to sweeten without sugar or artificial sweeteners.

Blackstrap molasses, Pure Maple Syrup, Honey and Sourgum are all great choices for your sweetener.

SO IN CONCLUSION....KEEP WHAT GOES INTO YOUR MOUTH AND BODY AS NATURAL AS POSSIBLE. DON'T TRUST MAN MADE CHEMICALS OR MAN MADE FOOD. STOP TRYING TO TAKE THE EASY WAY OUT AND GIVE RAW NATURAL FOODS A CHANCE.

www.eatclaan.com
Back to Taking Control of Your Health
Use left/right arrows to navigate the slideshow or swipe left/right if using a mobile device